EUB or Electric Upright Bass is a skeleton-style musical instrument that serves the function of a double bass. By using a pickup, an electronic amplifier, and a loudspeaker, it can produce a harmonious sound that is unique but comfortably familiar.

This lets you perform without the burden normally associated with an upright bass.

However, they should always be connected to an amplifier and speaker cabinet that allows for the audible perception of the produced sound.

The EUBs are quite similar to the double basses in structure and feature, therefore, it is very easy for the latter players to use it as well. All you need to do is support the instrument with a long endpin to your desired height or mount it on a stand and start playing.

We have created a list of 10 Best Electric Upright Basses that have long been favourites of players. We have tried to keep several options to choose from depending on the budget and quality features. So without further ado, let’s get started.

A truly professional-looking Maple body with stout solid design, the NXT4ADBSB is a portable EUB. The instrument has correct scale length, bow ability, mobility, and fingerboard profile. The tone is extremely rich and balanced due to the NS polar pickup system. It also comes with accessories like a boomerang strap, a freestanding tripod stand, and a padded Gig Bag for protection.

If you want to own an ergonomic electric upright bass with a stylish finish, then you must go for this bass instrument. But do note, it is a bit on the pricier side.

The next-gen brand new Yamaha SLB300 series electric upright bass is one of the finest natural resonance and sound-producing EUBs in the market. It allows the players to control the sound with the help of a button only.

The instrument creates a more natural sound and resonance because of the enabled Studio Response Technology or SRT system that helps to simulate a studio-quality sound. Thus, the performers can control their sound straight off the instrument. It has a ‘subway friendly’ structure and is designed purely for high-end acoustic tones. Moreover, it offers three types of microphone options for better usability. The EQ and blend control deliver an ideal sound for a growing musician.

Used mainly by noteworthy personages, this electric upright bass from Yamaha produces a fuller, clearer and richer upright sound. So if you are looking to have a professional feel while playing a EUB, you should definitely go for this one.

The next best EUB in our list is the EDB-¾ VBR electric double bass from Stagg. Under a budget price range, this EUB has to offer a lot of quality features.

This instrument has a ¾ size solid Maple body with state of the art electronic attachments. The machine heads are die-cast with nickel in P-bass style. That’s why the professionals will find it more suitable to play. On the other hand, the dot inlays on the instrument are perfectly located to give an exceptional look and feel, besides having a stunning finish and color. You will face no problem performing live or solo in the studio because of the adequate silence produced through electronics in the equipment.

The quality of the Stagg EDB ¾ VBR double bass is way better than what it’s worth. It is suitable for any beginner as well as an advanced player. 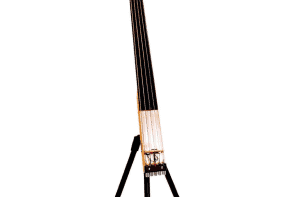 As you must know that the most realistic sound comes from the most high-priced instrument. But that is not the case with our next pick on the list of best Electric Upright Basses. The Big Kydd 5-String Upright Bass might be just the right fit for you.

This instrument has a curly maple structure with a Granadillo fingerboard and a Fishman BP 100 transducer to go with it. It supports about 35” strings, preferably the D’Addario ECB 81SL flat-wound strings. That is why the upright sound of the bass can comfortably be up to 35” scale. A tripod stand and a soft protecting bag are also included with the instrument.

This is a very lightweight budget-friendly electric upright bass, especially for the beginners. The structure and features of the Kydd 5-string upright bass provide quality performance to the players.

This upright pace bass has a stout solid maple neck and body with a slotted headstock. It also includes a 6” rosewood fingerboard allowing for the standard 35” scale. This contrabass instrument produces an exceptional resonance and tonal quality that will please you while performing live. Moreover, the instrument is quite versatile as it can be bowed to your needs and requirements. Besides being lightweight (with less than 10 pounds weight), you also get a Gig Bag for extra protection for easy and comfortable traveling.

If you are serious about playing upright basses and want to become a professional player then you must go for the Dean pace upright bass. 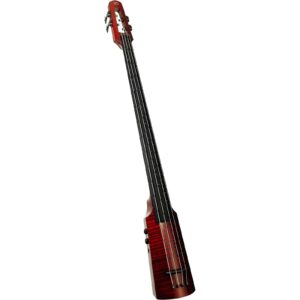 As you already have seen an NS product right top on the list of our 10 best electric upright basses, here we have another one coming. The NS Design WAV 4c Series 4-String Omni Upright Bass is another exclusive pick in the list. It gives you the feel of a bass guitar while playing a EUB.

The NS Design bass equipment are all similar in look and quality, just differ in feel due to the price differences. Their WAV4c series upright basses give you the distinct feel of a regular bass guitar through its 34” bass guitar scale.

The polar bridge pickup system in the equipment lets you the dual-mode operation. With easily drifted strings and a little bowing, you can have a unique experience. The fingerboard has an asymmetrical design along with a TransRadius profile for better playability with a left-hand feel. It is a lightweight impressive piece of art that has an accessible two-way truss rod, fully encased black worm gear tuners, and a boomerang strap system included in the package.

That’s a perfect fit for a bass guitarist wanting to play electric upright bass. If that person is you, just go for it.

The next best electric upright bass on the list is the Palatino VE-500. Bassists who truly want a portable yet easily operated EUB, this is the right one that fits your needs.

The device has a solid spruce head with a slim maple body and a carved ebony fingerboard. Along with active tone and volume controls it is equipped with a piezo transducer pickup. The ebony fingerboard gives you comfortable and easy playability. For more excellence, you can raise the strings and do the bowing. It includes a headphone amplifier for noiseless practice. It is a 4-string electric upright bass that produces sweet sounds almost close to the real acoustic ones.

You can even carry it around in the included robust bag with backpack straps for easy portability. If you are in need of an upright bass like this, just go for Palatino VE-500. 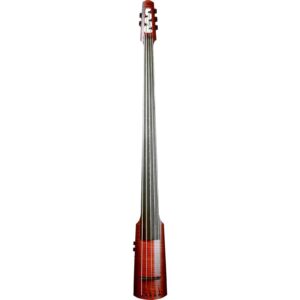 You have seen the NXTa 4-string EUB at the top of our list, while we are also including the 5-string NXTa Active Series upright electric double bass from NS Design in this chart. If you are looking for the highest standard Czech Republic crafted EUBs, then you must give this piece a thought.

Similar to the CR and EU series of the NS Design upright basses, this one, too, has a classic body of ergonomic design with 5-string upright configuration. After plugging the device to any AC outlet for a minute, you can play it over 15 hours. You can either play it with a low or high impedance input yet the sound will be clear and crisp every time. That’s the beauty of the device.

If you want to own an entry-level low-cost ergonomic 5-string EUB, then this is the right pick for you.

Another amazing electric upright bass to check out is the Lucky Penny Model EDB-BK. It is a black finished stylish looking ¾ size 4-string EUB with a double bass.

This solid-body instrument is equipped with active volume and bass controls that allow you to tweak the sound as per your requirements. Just plug in the instrument with an amplifier and get naturally sweet sounds. You can either connect it with a headphone while practicing or attach an mp3 player or soundbox for jamming. It is made with state of the art electronics for a natural double bass sound. For higher portability, the instrument also comes with a gig bag.

If you want a higher quality EUB within lower cost then the Lucky Penny model meets your needs perfectly. This electric upright double bass does not compromise its quality even after using high quality integrated electronics. 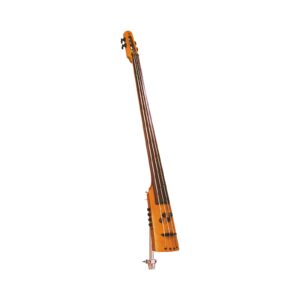 Oh boy, we cannot turn our eyes from the NS Design upright basses. Here’s the final one on the list, their CR series electric basses. This is another professional-grade instrument with proper scale length, fingerboard profile, ergonomic design, bow ability, and many more features.

It is a good quality 4-string electric double bass from the Czech Republic, a reputed place for top-notch quality upright basses. It has a European maple neck and body build with the traditional upright neck shape and flamed maple face.

Besides having a traditional profile, the neck is fitted with Macassar ebony fingerboard. It has an active 18V hum canceling preamp with volume, bass and treble controls. The instrument also comes equipped with a foldable chrome-plated tripod stand with an interior bag and a padded Cordura bag for the bass.

This highly portable beautifully designed CR Series electric upright bass from the NS Design is a catch for you.

There are generally two types of EUBs or Electric Upright Basses based on their built. One is the solid-body EUB and the other one is the hollow body EUB. Solid-body electric upright basses need electronic amplification to produce sounds due to the lack of any hollow structure. Whereas, the hollow body electric upright basses have a wooden hollow cavity smaller than a double bass to produce enough sound.

Some EUBs have inbuilt pickups and controls of volume on their own. Others are sold initially without any such pickups or controllers. A player might need to purchase them separately.

Why Do You Need An EUB?

Players who are fond of jazz, Cuban, and rock music styles might want these to play out themselves. Generally, the EUBs are the most common instruments to take up these styles.

The four-string EUBs are mostly played to make lowest to highest tunes through the E, A, D, and G strings, just like the double and bass guitars. But, there are also 5 to 9 stringed EUBs available in the market. If you are a fan of that pizzicato or bow tuning, or you are a dedicated bassist, then you surely want to play out an Electric Upright Bass. Also, EUBs have some great advantages over a typical upright bass.

We have discussed here some of the best Electric Upright Basses available in the market that will give you a full bass sound. If you’re a dedicated bass player and searching for a suitable electric upright bass for some time now, then we hope this read has been helpful to you.

We wish you all the success in your journey to becoming a skilled bass player. Hope you found this read to be a guide in your quest to own the best electric upright bass perfectly suitable to your need.

Newspaper is your news, entertainment, music & fashion website. We provide you with the latest news and videos straight from the entertainment industry.
Contact us: contact@yoursite.com
© Newspaper WordPress Theme by TagDiv